With an active social media presence and record-breaking success, Taylor Swift is at the pinnacle of her career. All this and more, just at the age of 25! How did she do it? What are her secrets? Can we learn something from her and apply them to our own careers? Here are four things that we can learn from the musical juggernaut that is Taylor Swift.
by Sharvaani S
40
Comments 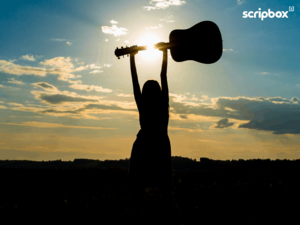 She needs no introduction as her reputation as a singing sensation precedes her. It amazes critics how a country singer made a smooth transition over to contemporary, popular music to only quadruple her popularity and record sales.

With an active social media presence and record-breaking success, Taylor Swift is at the pinnacle of her career. All this and more, just at the age of 25!

How did she do it? What are her secrets? Can we learn something from her and apply them to our own careers? Here are four things that we can learn from the musical juggernaut that is Taylor Swift.

Which is that one skill that you command and can perform even in your sleep? For Swift, it’s her talent for songwriting. At 25, we mostly have one, innate skill, which we feel certain about.

Such clarity of thought comes with introspection. Clarity helps in everyday life; you must know what you want from a job or any activity for that matter. Knowing exactly what you intend to achieve, helps you actually achieve it.

#2. Build a personal brand image
Taylor Swift is sure of her own power when she said, “You can be accidentally successful for three or four years. Accidents happen. But careers take hard work.”

It is no child’s play to represent the brand that is Taylor Swift. Whether it be switching from country to pop, or writing an open letter to Apple Music, you have to have a certain degree of faith in your skill and the ability to take a stand for things.

When Taylor withdrew her albums from Spotify, she could not have anticipated the debates it would raise, between streaming music and ownership-based consumption of music; she did not fathom the immense bargaining power that she held as an artist, claiming what was rightfully hers, in this case, royalty for every playback; but she still went ahead with what she believed in.

You have to learn to see yourself as not just as an individual but as a brand. Your career choices and the decisions you take along the way influence how prospective employers and stakeholders will perceive you as a brand. When someone hires you, they are believing in your brand. You want to be known in your profession as a brand just as Taylor Swift is known in the world of music.

#3. Manage your personal social media relations
Taylor Swift is known to keep her fans engaged with herself through her very popular blog on Tumblr. She not only responds to her fan mail but also shares realistic stories about her life. The value of such content beats anything that a tabloid can report about her.

You can also be your own public relations manager, by monitoring what you share on social media feeds, across channels. Not everyone can be a blogger or have that much to say every week.

With the mass appeal on social media, you speak to thousands of people at once, who are likely to make assumptions about you based on what you believe in.

#4. Learn the art of Relationship Marketing
Swift is known for inviting fans over and making them listen to her unreleased albums, to get their opinion on her music. When you have a record of selling a million albums a week, three times in a row, you certainly do not need to go the extra mile to please your fans.

That, however, is exactly what sets her apart from other artists, who struggle to sell about 500,000 albums in a whole year.

That’s the essence of the Taylor Swift marketing ideology. Be sensitive to what your audience wants and needs; and build a personal relationship with them, partially, by writing songs which people can relate to and partially by projecting yourself as a person and not a personality.

As a professional, you may not have a fan following like Swift's, but you always have stakeholders to deal with. It is always a good idea to work on your professional relationships as they have an uncanny role in your progress.

Your stakeholders could be anyone ranging from your reporting manager to an external vendor who you deal with regularly. As an entrepreneur, you are answerable to investors, board members, and certainly your employees.