Waited to invest till after election results? Should you start now?

Now that the election results are out, are you more confident about investing in equity?
by Lisa Pallavi Barbora
5
Comments Now that the election results are out, are you more confident about investing in equity? Investors who waited on the side lines to enter or re-enter equities post elections, may now get an expensive deal. Plus, staying away from equity pre elections, turned out to be a futile strategy.

Let’s recap how markets behaved so far in 2019. The chart below clearly demonstrates the short-term flip flop of the Benchmark Nifty 50 since January 2019. 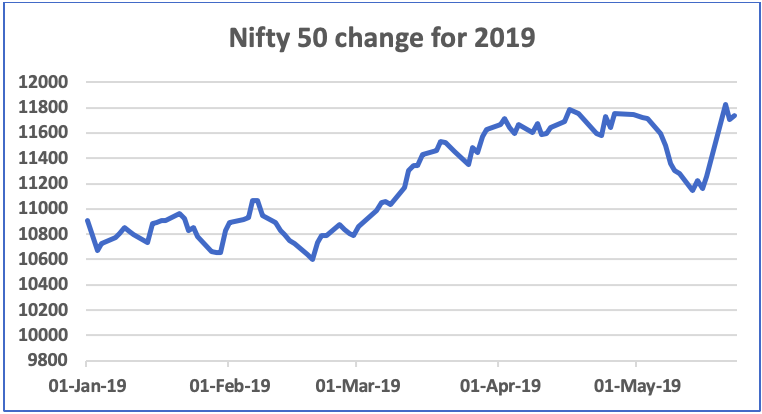 It shows that there was nothing to gain if you booked profits in April 2019 or any time sooner than that. You may have felt rewarded seeing the correction in the first half of May. However, the swiftness with which the benchmark moved back upwards was sure to have denied re-entry to many investors.

Mid and small cap indices saw their lowest level for this calendar year in February 2019. That too, however, would have been hard to capture in any meaningful way, given that the correction lasted barely 10-15 days.

Historical data and research shows, that election results can have an immediate sentimental impact on market movement, but there is no impact on long-term returns.

What should you do now?

Other than the price itself, you also need to understand value. This value is commonly measured by something called price earnings multiple, which essentially shows what investors are willing to pay for a stock or an index per unit of earnings delivered. The higher the PE, the more you are willing to pay per unit of earnings, hence, the more expensive a stock or an index is considered.

You can expect some downside in prices so that the value is normalised. Be prepared, but it is practically impossible to predict when it may occur. This, however, also needs to be viewed in the context of nearly one third of Nifty companies having seen a large profit margin compression over the last 5 years.

Stopping your SIP in anticipation will mean missing out on buying at lower levels, which is what is needed to build gains when the markets move back up. Given the uncertainty, it's best to invest regularly so that you are able to capture both the ups and downs in the market price.