The Myth, And Reality, Of Losing Money In Equity Investing

In this article, we're going to discuss a common myth that holds you back from making the most of your investments. We would love to hear back from you on what you think.
by Sanjiv Singhal
8
Comments 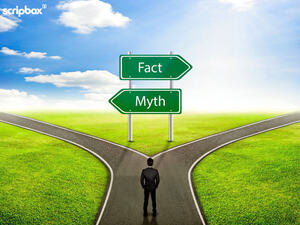 In this article, we're going to discuss a common myth that holds you back from making the most of your investments. We would love to hear back from you on what you think.

I recently met someone on a flight. When I told him what I do for a living, he looked at me suspiciously and said, "I don't invest in equity any more, I've always lost money. But gold is doing really well."

As you can imagine, I spent the next few minutes converting him to my firmly held belief that the best way for investors to get inflation beating returns is through equity investing. I hate to admit it but I don't think I was successful. I knew why the gentleman was unconvinced – it's called recency bias (more on this later) – but that didn't make me any happier.

When I got back to office, I collected some data and created the following chart. The outcome surprised even me. I wasn't prepared for how much better equity had performed compared to other investments. Note 3: The impact of taxes is not considered. Equity has no long-term capital gains tax. All other investments except PPF attract income or capital gains tax - further lowering the return.

My sceptical co-passenger would have been surprised to learn that over the long term he would have done better keeping his money in fixed deposits than investing in gold, and another shiny metal, silver, would have given a better return. But all of these would have faired poorly in comparison to the stock market returns. An interesting aspect of this chart is that even after the worst dips in the Sensex (for example 2008-09), cumulative performance of equity was far above the other asset classes!

When I showed this chart to a friend he almost accused me of cooking up the data. His experience is more like the chart below. Even FDs looked better than Equity. 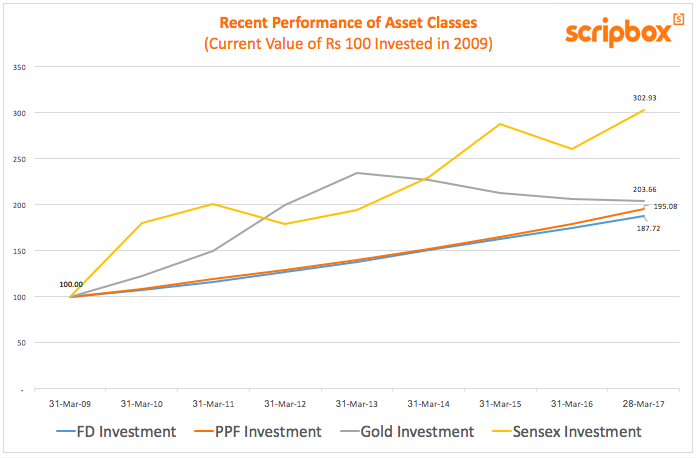 The only problem is that his experience holds true only for the last 5 years. But we have a tendency to give undue weightage to the most recent experiences in projecting the future. This is called recency bias and is deep rooted in human psychology. My friend, like my co-passenger, believes the last 5 years perfectly represent the behaviour of the stock market (and of gold).

Let's now consider how my friend had felt in 2007-08 when the recent performance looked like this: Things were very different then and with the recency bias playing its role, equity investment was clearly the best option. Gold was only a blip on his radar. Other investors thought the same too and year 2007-08 saw the highest ever inflows (Rs 1,48,485 Cr) into mutual funds!

The lesson here is to not be swayed by recent events and sustain your belief in your investment choices based on long term performance data. All of us have an investment horizon of approx 40 years (start earning at 22, retire at 60) and I would put my money on the long-term numbers. What do you think?