Passion with a plan - Richa Singh, Co-Founder, YourDOST - “If people can have a fitness coach then why not an emotional coach?”

Scripbox speaks to Richa Singh of YourDost to help our community learn from her start-up journey and from her experiences with money.
by Scripbox
15
Comments 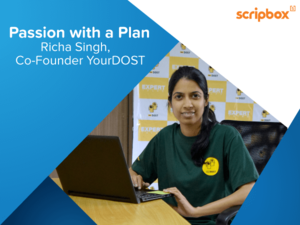 Richa Singh is the 28 year old co-founder of web based psychological and emotional counselling platform, YourDOST.

Richa's journey, which started with a life changing event and eventually became an obsession to help people with problems they would not even talk about, is an inspirational one. Scripbox recently spoke to her to find out how she made her dream come true and about her financial experiences during this journey.

Scripbox: What is your start-up about?

Richa: YourDOST is a web based platform that provides psychological and emotional counselling to those who need it.

Scripbox: Why did you start this company? How did you come to know if there was a need for it or not?

Richa: Well, it was a very personal experience that got me started on this path. In 2009, when I was a student at IIT Guwahati, one of my friends committed suicide due to anticipation of a bad placement. No-one had any idea about her suffering before she took the drastic step.

This incident affected me deeply. It was then that I started to research about psychological issues and emotional stress. I wanted to help people, even though I didn’t know exactly how I would do it.

Scripbox: What were the next steps that you took after the incident?

Richa: I got placed after graduation but at the same time I continued to research the world of psychological and emotional health. I spoke to quite a few experts in this domain and came to realise something important.

Scripbox: What did the experts have to say about the state of psychological health in India?

Richa: My conversation with the experts, and the research we did, told us three things:

1. The stigma attached to such issues is high, people are very circumspect about talking about such issues. The data states that almost 70% to 80% want to speak to a therapist/expert regarding their mental health and well- being.

2. Aspirations and expectations are rising, both on the professional and personal front. This is leading to a higher stress in people’s lives. In fact, One in four individuals  faces some mental health issue at some point in their lives.

3. Due to nuclear families, the support system that existed in older generations is collapsing. In most cases, it is simply not there anymore.

Scripbox: So how did all this lead to YourDOST?

Richa: The more I researched, the more I realised the need for an urgent solution. I thought if people can have a fitness coach then why not an emotional coach?

I also realised at some point that it has to be a tech based solution as a physical system would be harder for people to access due to the need for anonymity. This was the seed for YourDOST.

Scripbox: So when did you start YourDOST?

Richa: The research took place between 2009 and 2011. My co-founders and I began with a blog first in 2013. The popularity of the blog further helped us understand the need for a web-based solution. It was in 2014 that we actually started with YourDOST.

Scripbox: Let’s talk finances. How did you raise the initial funding required to launch your company?

Richa: We raised our first funding from a crowd funding platform called MILAP. The funding raised here was more than we expected initially. My co-founders and I also pooled together our savings which we had accumulated over the past couple of years. This was how we got the initial corpus that we required.

Scripbox: You mentioned that you were working. When did you quit to work fulltime for YourDOST and was your family okay with this decision?

Richa: I quit about a month before we raised the initial funding through MILAP. My parents were not comfortable, initially, with my decision but support from my brother helped a lot.

Scripbox: Before you quit did you have any financial plan in mind? Were you prepared for the potential loss of income?

Richa: Yes, definitely. I had made sure that I had at least 5-6 months of expenses accumulated before I decided to quit my job. I wasn’t sure if we will get the needed traction and thus I wanted to be prepared for the long haul.

Thankfully the initial funding via MILAP which exceeded the target amount we wanted, and in just a month, helped us quite a bit.

Scripbox: For the initial stage of your start-up journey, did you have to make financial sacrifices? How did your personal attitude towards money help you?

Richa: I did have to make sacrifices but my life long attitude towards money helped. I have understood the importance of money and even as a child I had decided that I would be financially independent.

I used to save at least 50% of my salary. This is a habit I have maintained since I started earning. When I was saving for YourDOST, I made sure my discretionary expenses were kept at the lowest level possible.

I have lived a frugal life and continue to do so. Even now I try and save as much as possible and invest in the company.

Scripbox: Did you invest your savings?

Richa: I believe that every person must have a financial plan. Although I did not understand investing very well and was safety oriented, I made sure that my money was invested, if in nothing else, at least in safer options like FDs.

I personally keep about 60% of my savings in safer options with fixed returns and 40% in other options like mutual funds.

Scripbox: Do you equate money with happiness?

Richa: As I said, I understood the importance of money even as a child. While money is not equal to happiness, money is definitely important. I have always made sure that I earn enough for at least my needs (which are not a lot!)

Even YourDOST could have been launched as an NGO but I chose to create a company that would generate revenues at some point.

I did not want to chase after donations which would have limited the scope of YourDOST. Thus self-sufficiency and sustainability is very important, in my opinion.

Scripbox: What is the one piece of advice you would like to share with the Scripbox community?

Richa: When it comes to saving and investing, start early even if it is a very small amount. Go to an expert and learn about investing as it is an important skill to have.

This new series by Scripbox talks about how entrepreneurs are turning their dreams into reality. We will focus on the financial aspects of their journey and how their relationship with money helped them realise their entrepreneurial dreams.

Published on 15/02/16
Updated on 08/04/19
Home › Personal Finance Blog › Inspirations › Passion with a plan - Richa Singh, Co-Founder, YourDOST - “If people can have a fitness coach then why not an emotional coach?”
Share Share
15
Comments
Related Tags
Wealth Creation Women And Finance