Monsoon Anxiety: How Much Should Equity Investors Worry About The Monsoon?

Every year, in the month of June, the Indian stock market suffers from "monsoon anxiety". The weather department predictions are widely reported, discussed and analysed. The thinking goes that the performance of the monsoon affects the rural economy and therefore the performance of stocks - in general and specially those with large rural consumers.

We did a quick analysis of the two variables that should represent this relationship.

2. Performance of the agricultural economy: Represented by total Grain production. Total grain production has been growing at 1.9% pa over the past 20 years.

The chart below shows how the two correlate. 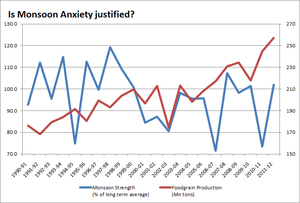 The data does not appear to support conventional wisdom.

1. There seems to be little correlation between the monsoon strength and growth in grain production on an year to year basis

2. The period where grain production was materially affected was in the 2000-03 period, when we had 3 consecutive years of very weak monsoon (well below 90% of long term average)

We, therefore, think that "Monsoon Anxiety" is unwarranted. The agricultural economy appears to be robust enough to take a weak monsoon in its stride.