How do economists interpret GDP?

Informed experts can check the health of the economy by looking at its various components. GDP numbers have been in the news in the recent past. Let’s understand what it really is and what it tells.
by Muthukumar K
1
Comments When you go for a heath check-up, the pathologist does various tests. Blood samples to test your blood sugar levels, ECG to check your heart and chest X-rays to check for any abnormalities. They tell your health status right away.

Similarly, informed experts can check the health of the economy by looking at its various components. GDP numbers have been in the news in the recent past. Let’s understand what it really is and what it tells.

GDP or Gross Domestic Product is calculated as the market value of all the finished goods and services produced within the country. It is alternatively measured as a sum of Consumption (C), Investment (I) and Government Expenditure (G). Consumption (or spending) by the households along with investment by businesses and government spending comprise the major part of the economy.
To the above figure, if one incorporates the external sector by adding the net exports (exports minus imports or X - M) one arrives at the nominal GDP of an economy.
So GDP = C + I + G + (X– M)
While calculating the GDP growth rates, real GDP figures (adjusted for inflation) are taken into consideration. Thus, inflation is the fifth factor that cannot be ignored. So, in all, you can look at five things to check the robustness of the economy.
Consumption Consumption is the largest component (57%) of India’s GDP. It acts as a primary driver of the economic growth in the country. A good growth in consumption bodes well for the economic growth. If consumers are confident about their future income, they will spend more. However, any sign of job insecurity and uncertainty over income is likely to delay their spending.
In the past, consumer spends - as measured by growth in the Private Final Consumption Expenditure - has been clocking healthy growth rates of 7-8% annually.
Investments 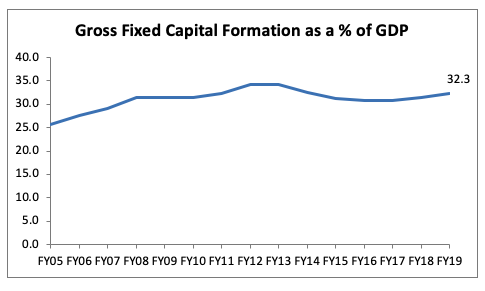 Investment is the second largest component of the Indian economy. These are investments by firms and not households and refer to the capital formation in the economy. If the companies are confident about the economy, they are more likely to invest in capital, new projects and machinery.
Large investments over a period of time increase the capital stock of the nation and the potential to grow at faster rates.
India’s investment rates – as measured by Gross fixed Capital Formation as a percentage of GDP - have been averaging about 31 percent in the last five years. The rates have come down from the higher levels seen in 2011-12 and 2012-13.
An annual investment rate of 30-35% is considered essential for achieving 6-7% growth rate for the economy.Additionally, experts browse through monthly IIP (Index of Industrial Production) to decipher recent growth trends in various industrial sectors.
Government expenditure
Government expenditure is of two types. Spending on education, health and salary of its employees are of recurring nature, while laying roads, building schools and hospitals are capital-intensive. More the share of capital spends, better it is, supposedly. More importantly, check the deficit figures – which points at the gap in its revenues vis-à-vis that of expenditure. Gross fiscal deficit as a percentage of GDP has been going down for India.
And whenever it went out of control, it had triggered inflation and slowed down the economy. So, many experts and economists watch if the government is maintaining its targeted fiscal deficit. For 2019-20, central government has a targeted fiscal deficit of 3.3% as a percentage of GDP.
Net exports
Imports refer to the foreign goods bought by local consumers, while exports are domestic goods sold abroad. Net exports are the difference between exports and imports. It is affected by many factors including that of global demand, exchange rate, and trade policies.
Current Account Deficit (CAD) - the net of foreign exchange inflows and outflows are tracked regularly. A sudden spike in the CAD as a percentage of GDP can spell trouble for the economy.

Moreover, experts watch actual consumer inflation figures vis-à-vis that of the RBI forecast. RBI has forecast consumer inflation in the range of 3.5-3.7% for the second half of 2019-20. Any persistent price rise can affect the health of the economy.

Inflation
Good monsoon and low oil prices (because we import a lot) generally have a healthy effect on the Indian economy. This in turn can keep consumer inflation under control.
Moreover, experts watch actual consumer inflation figures vis-à-vis that of the RBI forecast. RBI has forecast consumer inflation in the range of 3.5-3.7% for the second half of 2019-20. Any persistent price rise can affect the health of the economy.
Takeway
Economic growth can be hard to predict or decipher. Specialists therefore probe into the components of the GDP by looking at figures on consumption, investment, fiscal deficit and inflation. This to an extent tells why the growth rate has increased or fallen and gives some insight into the economy’s future.
Published on 03/12/19
Home › Personal Finance Blog › Investment Strategy › How do economists interpret GDP?
Share Share
1
Comments
Related Tag
Investment Strategy