Does it make sense for NRIs to invest in bank fixed deposits?

By investing in FDs of Non-resident Ordinary (NRO) and Non-resident External (NRE) accounts, NRIs get to earn better returns than in their savings account. But is it the best alternative?
by Muthukumar K
5
Comments NRIs often keep their money idle in a savings account - be it in Indian or foreign bank account. Here’s where the role of Fixed Deposits (FDs) come into play. By investing in FDs of Non-resident Ordinary (NRO) and Non-resident External (NRE) accounts, they get to earn better returns. But is it the best alternative?

A) Rules and regulations

First of all, let’s understand the rules and regulations concerning NRIs for opening and repatriation of bank FDs as well as its tax implications.

NRIs can open rupee FDs either in their NRE or NRO account. NRE FDs are for those earning in a foreign currency and willing to convert it into Indian currency before investing. In contrast, NROs are primarily meant to manage your income earned in India. So, you need to open an NRO FD account with a local bank if you have a rupee income.

How does one get it?

NRO account can be either a single or a joint account with another NRI/ resident Indian in an Indian bank. However, the resident Indian has to be a close relative, while the mode of operation shall be ‘Former or Survivor’, according to which the primary applicant shall have rights for financial and non-financial transactions.  NRE account in contrast cannot be opened jointly with an Indian resident.

Interest earned on NRO accounts is taxable while it is tax-free for NRE accounts. In the case of NRO accounts, interest income will be added to your total income in India in that financial year and taxed as per the income tax slab applicable.  For those in the highest tax bracket, it will work out to 31.2 per cent (including 4% cess and zero surcharge) of the accrued income.

When should these documents be submitted to avail DTAA benefit?

Documents have to be submitted at the time of requesting for the DTAA benefit as well as for each year of the tenure of the deposit.

What are the applicable TDS rates on interest income for various countries under DTAA?

It is usually in the range of 10-15% of interest income for most of the countries. Check the below table for specific details. 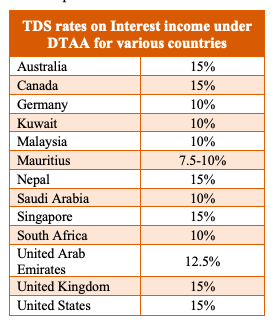 Are my deposits repatriable?

Only the interest income is repatriable in case of NRO accounts, while overall remitting is limited to $ 1 mn in a financial year and subject to RBI regulation. In case of NRE accounts, interest, as well as principal, is freely repatriable.

Repatriation of funds exposes both NRO and NRE deposit holders to fluctuations in the rupee value against the concerned foreign currency.

Once we have understood the legal and tax nuances, let’s compare the lucrativeness of NRO and NRE FDs with another popular investment option – debt mutual funds.

An NRO FD can be opened for a period of seven days or more and upto 10 years. NRE FD in turn has a minimum tenure of one year. The interest rates offered on its FDs are usually the same as that for its domestic term deposits and usually changes with the modifications in the interest rates of the economy.

And there are various types of debt funds. Out of the lot, liquid funds, ultra-short duration and short-duration funds are ideal for those investing with an investment horizon of up to five years.

Let’s compare their attractiveness on the aspects of safety, returns and liquidity as against that of NRO and NRE fixed deposits.

Bank FDs are considered a ‘safe haven’, since it comes with the security of compensation of up to Rs 5 lakh per deposit from Deposit Insurance and Credit Guarantee Corporation (DICGC), in case of defaults. But banks don’t have a clean chit as its history is replete with failures in both the private and public sector. In the last one year itself, depositors of PMC and Yes Bank faced hardships with restrictions being imposed on fund withdrawals.  Few days back, it was depositors of Lakshmi Vilas Bank that bore the brunt. While it’s a different issue that RBI bails out many of these failed banks (by merging it with bigger ones), there is no denying the fact that bank depositors remain vulnerable to financial mismanagement of banks.

Debt funds, in turn, invest their portfolio across debt papers of government and companies. Their safety can be deduced from the portfolio they invest in - typically sovereign to AA-rated papers.

Except for credit-risk funds, where the endeavour is to earn higher returns by investing in lower-rated bonds, most categories of debt funds invest largely in top-quality bonds. However, some deviate in their quest to be on top of the return charts, and ultimately, pay the price. With careful analysis, you can pick debt funds whose portfolio has a combined credit risk almost on par with top bank FDs.

Bank FDs are illiquid and you can withdraw money prematurely only after paying a hefty penalty of 1-2% of the deposit amount. Moreover, some banks might not allow partial withdrawal. In case of NRE FDs, prematurely withdrawing within a year is tantamount to losing all the interest income.

In contrast, the above-mentioned debt funds have ample liquidity. You can get money into your bank account within one  to three working days of putting the redemption request. And most of these funds don't have any exit load.

In short, debt funds score over NRO and NRE FDs when it comes to liquidity.

Returns on bank FDs (for reliable banks) are assured and you can accurately predict the amount of money you will earn at the time of maturity. However, its interest rates keep changing based on the interest rates in the economy. At this juncture, interest rate on one-year NRO and NRE fixed deposits of leading private banks are 4.9 % p.a, while it is 5.5% p.a. for 5-10 year deposits.

In the past, debt funds have offered a similar pre-tax return to that of bank FD. However, unlike bank FD, its returns are not guaranteed. Nevertheless, if you have an investment horizon of three years or more, debt funds have stacked up as a superior alternative in the past.

This is because interest income from bank NRO FD is taxed at the marginal rate (30% for those in the highest tax bracket), while long term capital gains (three years or more) of debt funds are taxed at 20% after providing for indexation benefits. The tax liability in case of the latter works out very low in actual terms.

Suppose an NRI invested Rs 1 lakh in an NRO FD five years back which matured today. Five years back, interest rates on bank FD were 7% p.a. If she was in the highest tax bracket, interest income would have effectively yielded 4.9% p.a on a post-tax basis. Instead, if she had invested in a good-performing short-duration debt fund, she would have an earned annualized pre-tax return of 6.5%.

On a post-tax basis and after accounting for indexation, it will work out to an annualized return of 6.0%. Since the cost-inflation index for the current year is not yet released, the cost inflation index of 2019-20 (289) and 2014-15 (240) were considered for the calculation.

It needs to be noted that taxes on interest income are applicable only for NRO FDs and it is tax-free for NRE FDs. So, in a way, debt funds might not match so much on returns of NRE FDs on a post-tax basis. However, there could be liquidity issues with NRE FD since they can be opened only for a tenure of one year or more and any premature withdrawal within a year will result in losing all the interest.  So, in a way, while debt funds are better on liquidity as compared to NRE FDs it is not so much on returns in the current scheme of things.

To sum up, while NRO FDs offer assured returns, the post-tax returns of debt funds have been superior. Safety of good debt funds is almost on par with bank FDs if the correct choices are made, while liquidity is abundant. As an investor, NRIs are therefore better off with a debt fund than a bank FD.

How to choose a debt fund

However, while choosing funds, don’t chase returns and focus instead on safety aspects. For instance, by checking if their investments are in high safety instruments (Sovereign, AAA, and A1). This, in turn, will allow you to protect capital and grow your wealth as well.