I visited Kolar couple of weeks ago. Once famous for its gold mines, it is now more famous for its golf course on top of the ground. Mining for gold at Kolar was stopped about a decade ago. But coming as my visit did amidst raging debate about India’s balance of payments and the role of gold, I decided to ‘dig deeper’.
by Ravishankar
9
Comments 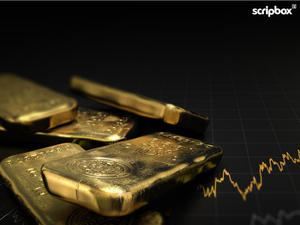 The empty mines at Kolar : a testament to the lure of gold

I visited Kolar couple of weeks ago. Once famous for its gold mines, it is now more famous for its golf course on top of the ground. Mining for gold at Kolar was stopped about a decade ago. But coming as my visit did amidst raging debate about India's balance of payments and the role of gold, I decided to ‘dig deeper'.

For over 4000 years gold has been considered the ultimate reservoir of value. This belief has withstood the test of time, and even in an era where the global banking system is well synchronised through computers, gold has been hitting new highs – driven apparently by its status as a ‘safe' store of value.

This is even more so for Indians. We own almost 1/10th of the world's stock and consume close to 30% of annual gold mined. The recent rupee crisis has been blamed squarely, by quite a few illustrious people, on our love for gold.

India is now consuming about 650 Tons of gold annually on a net basis. Note that about 25% of the gold imports are exported in the form of finished jewellery. Compare this with the annual demand of about 160 Tons in US. Now, all this gold needs to b imported, as practically nothing gets produced in India. 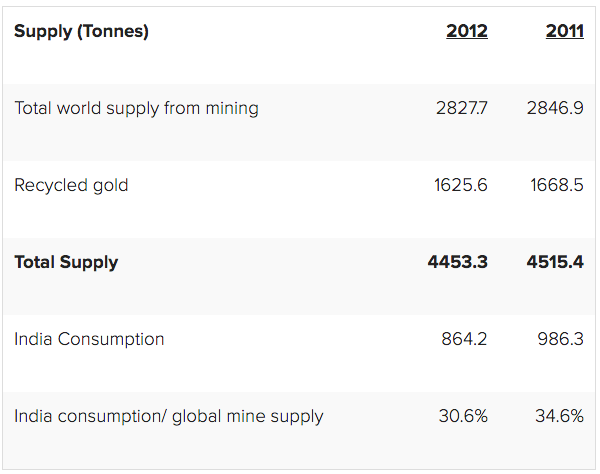 By absorbing close to 30% of mined gold in any year, to a large extent, the Indian consumer demand dictates the global price of gold.

The familiar case against gold

(The case for gold follows so don't stop reading)

Unlike stocks, bonds, real estate, which give you dividends, interest or rentals, respectively, gold does not produce an income. This case against is best made in Mr Warren Buffett's 2011 annual letter.

“Today the world's gold stock is about 170,000 metric tons. If all of this gold were melded together, it would form a cube of about 68 feet per side. (Picture it fitting comfortably within a baseball infield.) At $1,750 per ounce – gold's price as I write this – its value would be $9.6 trillion. Call this cube pile A. Let's now create a pile B costing an equal amount. For that, we could buy all U.S. cropland (400 million acres with output of about $200 billion annually), plus 16 Exxon Mobils (the world's most profitable company, one earning more than $40 billion annually). After these purchases, we would have about $1 trillion left over for walking-around money (no sense feeling strapped after this buying binge).

Can you imagine an investor with $9.6 trillion selecting pile A over pile B?”

I will attempt to make a similar comparison for India. At present the physical size of the total stock of gold in India will be about the size of 8 buses. In value terms this is about the same as the total market value of all listed companies in India. So you could buy all the listed companies in India for the amount of gold we have – 8 busloads worth! Which would you choose?

As we'll find out, it's a question that has no simple answer.

Does investing in Gold make sense?

Compared with $35 billion invested in equity Mutual Funds, gold holdings in India are worth $ 1 trillion - a whopping 30 times. Do these investor know something that Mr Warren Buffet doesn't? What is the return that these investors have made?

The following tables shows gold price performance over the past 6 decades, in both USD terms and INR terms. (Prices are closing prices for the year.) 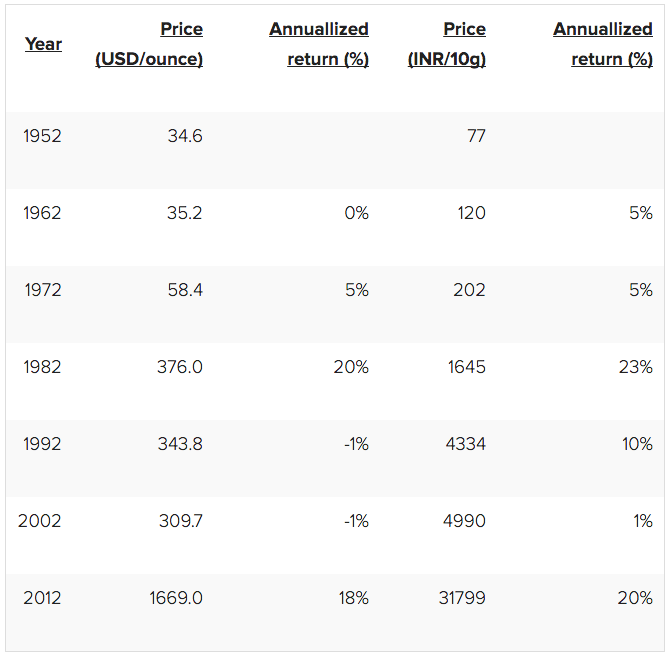 Observations on this table:

3 points on the data:

Is it fair to ask investors to stop loving gold?

One question that is discussed at large is if the Indian investment in gold is channelled to the real economy, much of India's infrastructure problem can be solved. But that's hardly an argument to lure an investor who optimizes at an individual level.

It is likely that people have been investing in gold partly due to the business world's inability to prove its ability to consistently deliver real rates of return. Though the Sensex has delivered average annual rates of return close to 16%, we also have a scenario where over 2/3rd of companies ever listed have faded away.

We believe that, with time and increased maturity of the economy, the business world can create systems and processes to attract the savings of the Indian consumer into the industrial economy and deliver a reasonable real rate of return consistently. Until that point in time, chances are that more money will gravitate towards gold.