Can Anyone (Even People Like You And Me) Create Wealth?

How do rich people become rich? Is it their bank balance? Do they have multi-crore FDs? Is it the value of their real estate holdings, or something else?
by Sanjiv Singhal
39
Comments 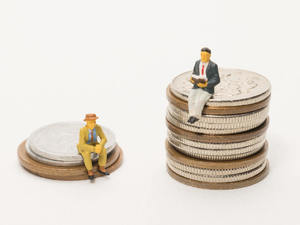 We all know that billionaires, whether Warren Buffett or Bill Gates, have more money than we can imagine. Here’s an interesting question for you though. What do you think is their “wealth” made up of?

Is it in their bank balance? Do they have multi-crore FDs? Is it the value of their real estate holdings, or something else?

The truth though is that they are rich because they own companies and the companies they own are very valuable. The top five rich people in 2017, from Bill Gates to Mark Zuckerberg, each one has a net-worth more than $50 billion, and each owns a significant share in certain companies.

Their source of wealth is not “cash” or buildings or private jets. Nor is it their “jobs”. It’s the companies they helped establish and/or are part owners of. You might notice that this is also true of the “rich” people around in general - more often than not they happen to be business owners.

The rich own not just their own companies, but (like Warren Buffet) may just be part owners of other companies. The top 10 list of richest individuals doesn’t include any movie stars or sports stars or real estate moguls. Interesting, huh?

So why is it that the world’s richest people own companies?

Companies are generators of goods, services, and most importantly of talented people - people like you and me who are the key creators of wealth in companies. Their smart ideas lead to the next generation of goods and services.

The result is that a successful company creates what is called “economic value”. Essentially, their output is more valuable than the sum of all the inputs that go into making their product or service. A Domino’s pizza is more valuable to the person ordering than the sum of the flour, tomatoes, building rent and salaries etc that go into making it.

That - is wealth creation.

Guess who reaps the maximum benefit?

The shareholder does, in the form of an increase in the value of their shares and regular dividends. Since the promoter of the company or the majority shareholder owns most shares in such a “great” firm, they receive most of the payouts.

But it’s not just the founders who benefit. Most often there are other investors in these companies - VCs for private companies and individuals like you and me for listed companies. And they benefit too.

Why should you know all this?

You should know this because the same solutions to becoming wealthy are available to you too. You don’t necessarily have to establish your own company even.

The easier option is to be part owner of other companies by buying their shares. But, how do you know, among the thousands of companies, which one will be successful?

That’s where equity mutual funds come in. Let professionals decide which companies are the most likely to create wealth. You simply invest in them to become wealthy. You might not make it to the top 10 richest people list, but at least you will have enough wealth to enjoy life - or to start your own company.

Published on 03/10/17
Updated on 23/07/18
Home › Personal Finance Blog › Good Ideas › Can Anyone (Even People Like You And Me) Create Wealth?
Share Share
39
Comments
Related Tag
Wealth Creation