Are equity markets getting in shape?

The 35 percent market correction (as of 19th March 2020) from its peak has pulled down market valuations. Two points are worth noting about this.
by Muthukumar K
1
Comments Ever since the Indian stock market started falling, I have been in high spirits. I am not lying just to impress you. And it is not that I get any sadistic pleasure hearing about the investor’s wealth evaporating in minutes. I truly mean what I say.

I don’t know if the market has bottomed out. But Indian equities might be getting back in shape. And with days, getting leaner and nimble - to MOVE AHEAD.

The 35 per cent market correction (as of 19th March 2020) from its peak has pulled down market valuations. Two points are worth noting about.

1. Bonds out, Equities in

Long-term interest rates in the economy have crashed in recent times. The yields on the 10-year G-sec bonds have plummeted to a 10-year low of 6.2 per cent. While some debt fund investors benefited from the move – as bond prices (and fund NAV) and interest rates move in the opposite direction - the flip side is that perhaps the interest rates have bottomed out.

Often, bond yields are compared with the earnings yield of BSE Sensex companies to gauge its relative lucrativeness. The latter is the inverse of the Price-to-Earning (PE) ratio of Sensex. So, if BSE Sensex PE is 20, its earnings yield is 5 (100 divided by 20).

After the recent stock market crash, Sensex earnings yield has increased to 5.7%; it is a tad lower than the bond yields at 6.2%.

One-on-One
For the sake of simplification, let’s take the ratio of Sensex earning yield to that of bond yield. A ratio of more than one could be considered an attractive period for equity markets and vice-versa.
In the past, it has been seen that whenever this ratio has been above one, a bullish trend has ensued in the equity markets. For instance, between the periods Aug 02-04, the ratio was above one, and equity markets rallied during the period and thereafter (See chart). It was one of the strongest rallies ever.
Later, post the crash of 2008, for the period from Oct 2008-march 2009 the ratio remained above one. The markets moved sharply from thereon.
With the recent fall in share prices, the ratio - which was 0.59 in Jan 2020 – has jumped to 0.91. Historically, such a high figure has favoured equities.

2. Buffett Indicator
Legendary investor Warren Buffett once commented that it is perhaps the best single measure of equity valuations at a point in time. And that is stock market capitalization to GDP percentage, which compares the value of all listed stocks in an exchange to the value of the country’s annual output.
The thumb rule is that a figure more than 100% (90%-115%) – when market cap is more than GDP that is - is said to indicate that the stock market is overvalued. While a figure between 75%-90% indicates ‘fair’ valuations, a value between 50%-75% hints at ‘modest undervaluation’. 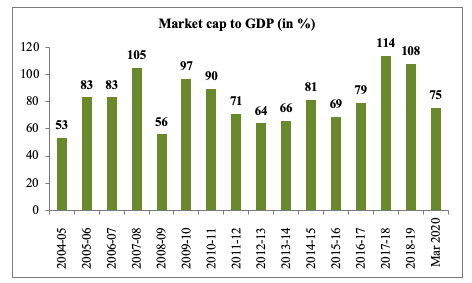 Historically, whenever, this ratio had reached 90% or higher levels, bearish trends have engulfed the Indian equity markets.
With a 75% market cap to GDP, India equities have now just about entered the undervalued zone.
Investment strategies
Of course, nothing can be generalized and the above data needs to be juxtaposed with other fundamental factors as well. However, like any other bear market that has gripped Indian stock markets in the past, bears will eventually loosen their grip – thanks to the resilience of the Indian economy. It’s just a matter of time.
You can take some action at this juncture.
If you have recently entered equity markets, it might be disheartening to see your portfolio value take a free fall. Don’t lose heart. As experience in the market tells us, economic resilience will eventually fuel the market upwards.
Continue with your SIP investments as usual. If too much of bad news is worrying you, temporarily stop reading financial newspapers and watching TV.
However, if this drop has rattled you and you are not able to stomach the risk, revisit your asset allocation. Perhaps you have taken more risk than warranted. Wait for the upturn to tweak your asset allocation.
And for those who haven’t started investing in the market yet, there is only one thing to say. Don’t try to catch the bottom of the market. Start the SIP.
Takeaway
Post-market correction – equity valuations appear to be better from a historical perspective. While markets might slip further (and become leaner in the process), keep the faith in equities.
Published on 19/03/20
Updated on 19/03/20
Home › Personal Finance Blog › Investment Strategy › Are equity markets getting in shape?
Share Share
1
Comments
Related Tag
Investment Strategy

Author
Muthukumar K
Muthukumar K has been writing extensively on personal finance for the last two decades. He is often seen in a blissful state sparked off by Heartfulness Meditation.
Share
1