The common refrain is, “I would have gotten better returns from an FD!” Considering many of these investors have earlier invested in FDs, or their parents have, looking at what their fixed deposit has given them and questioning the value of equity is not wrong, if one considers their point of view.
by Satyam Pati
6
Comments Many first-time investors in mutual funds often get disheartened when they see their SIP returns in the first few months or even a year, don’t look like what they had imagined.

The common refrain is, “I would have gotten better returns from an FD!” Considering many of these investors have earlier invested in fixed deposits (FD), or their parents have, looking at what their fixed deposit has given them and questioning the value of equity is not wrong, if one considers their point of view.

Comparing with what we know

There is no perfect investor and the ones who are considered the best and wisest, have also made their fair share of errors. Many of us started with direct equity thinking we know better and ended up burning our fingers. There are those who tried spotting the next “multi-bagger” in small caps and came out poorer than what they were when they began.

If an investor, therefore, ends up comparing equity with what they know and have experience of, it’s not at all "unjustified". On the contrary, they are being honest with themselves. This is a fairly common mistake that stems from a lack of experience and correct information.

So, is it really wrong?

Comparing equity mutual funds with fixed deposits is like comparing a passenger jet with short haul AC buses, that you often see plying within cities. They both serve similar looking purposes but are nothing alike.

A fixed deposit earns a fixed rate of return (which does fluctuate but it’s not visible to you). Nothing more, nothing less. Historically, the pre-tax return from fixed deposits has been 1%-2% above inflation. The post-tax return, as interest income is taxed, is generally lower than inflation. This means that when the time frame is in the decades, fixed deposits don’t really grow your wealth

Behavioural Science tells us that we humans love predictability and stability. We like straight line growth curves. Look at the chart below showing performance graph for a large cap equity fund when compared to a fixed deposit over a decade. The comparison doesn't take into account the impact of taxes which would further lower FD performance vis-a-vis an equity mutual fund. The three charts below show the same comparison in three different years of the same decade. In one year, equity underperforms fixed income. 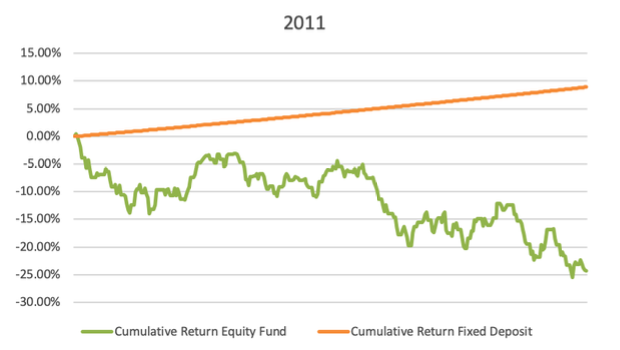 In 2016, equity did better as well as worse than an FD.
The truth
When an investor ends up comparing the short term returns of a fixed deposit with equity mutual funds, in reality they are comparing volatility and not returns. This is more so if they are considering exiting the mutual fund just based on the returns they see in a few months or even a couple of years. When considering a ten year period, even at its worst, equity can often outperform an FD. But then these are two different asset classes with very different objectives.
Every asset class has its own volatility profile. Some fluctuate a lot more than others. Equity is infamously unpredictable in the short run, but history has shown it to be a true long-haul wealth creator. On the other hand, a fixed deposit offers short term stability but poor long-term returns. Both instruments have their uses, but for very different goals.
This is why when you have a clear understanding of your financial goals, choosing the right asset class is much easier and so is ignoring short term fluctuations.
Published on 13/08/19
Updated on 10/10/19
Home › Personal Finance Blog › Wealth Creation › Comparing equity mutual funds with fixed deposits? What’s wrong with this?
Share Share
6
Comments
Related Tag
Wealth Creation